MODERN MALBEC: FROM CAHORS TO MENDOZA 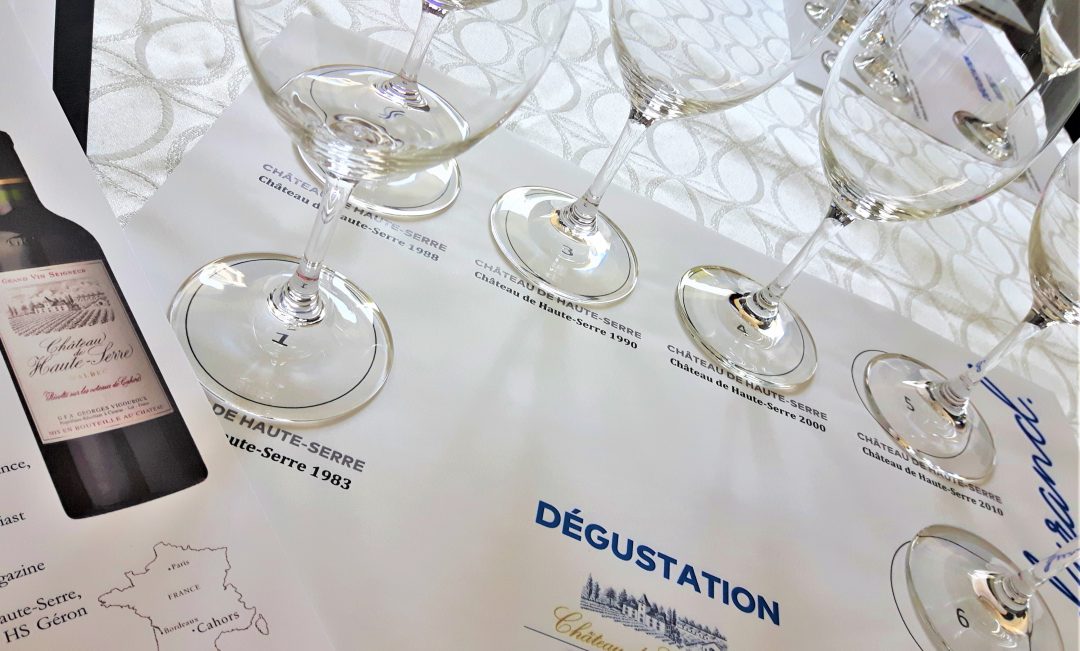 Over the course of two days in September, I attended two excellent tastings that highlighted the versatility, ageability, and downright drinkability of Modern Malbec. On the Tuesday, reputed Argentine wine writer Joaquin Hidalgo took me through an exciting line up of white and red wines, including a delicious range of Mendoza Malbec and Malbec dominant blends. On the Wednesday, I tasted with Bertrand-Gabriel Vigouroux, proprietor of esteemed Cahors estates: Château de Haute-Serre and Château de Mercuès.

Native of France’s South West, Malbec was once widely planted through out France. The variety was so common that, according to Jancis’ Robinson’s Oxford Companian to Wine, there exist over 1000 different synonyms for it. Côt, Pressac, and Auxerrois are just a few examples.

Native of France’s South West, Malbec was once widely planted through out France.

From its pre-phylloxera heydey, Malbec saw a long, steady decline to near oblivion in France over the course of the 19 hundreds. It is a finicky grape, sensitive to frost damage and fungal infections, and prone to uneven flowering and poor fruit set. Once a major red grape in Bordeaux, it is now very much a minor player. After a particularly severe frost in 1956 that decimated Malbec vines, growers preferred to replant with more reliable Merlot and Cabernet Sauvignon.

Today, Malbec is principally grown in the Cahors AOC in France’s South West wine region. Here, the vine flourishes in the dry, sunny climate. The classic style of Cahors is can be quite rustic, with its deep, brooding colour, its powerful palate structure, robust tannins, and gamey flavours. Yet, quality-minded producers like Georges Vigouroux’ Château de Haute-Serre are increasingly moving toward a more approachable, modern Malbec . “Our goal is elegance over power”, explains Bertrand-Gabriel Vigouroux. “The focus is on drinkability”.

The classic style of Cahors can be quite rustic…quality-minded producers are increasingly moving toward a more approachable, modern Malbec.

This same objective is being sought some 11 000 km away, in Mendoza, Argentina. First planted in the mid 19th century with cuttings from France, Malbec’s popularity surged in the 1990s and remains Argentina’s signature grape to this day.

Mendoza Malbec has traditionally been a lush, weighty, overtly fruity affair: inky black, fuchsia-rimmed colour with intense, baked black fruit aromas, a full-bodied, velvety smooth palate, and warm (sometimes boozy) finish. These styles still abound from the flat plains around Mendoza city, but over the past 10 to 15 years, growers have been heading ever further up the Andes mountains in search of cooler temperatures,  fresher wines and the incredibly concentrated flavours that the higher UV levels can bring.

The Valle de Uco and Lujan de Cuyo are the two best known Mendoza sub-zones for cool(er) climate Malbec. The vineyards here range in altitude from 850 metres to over 1500 metres above sea level. Each of these areas is further sub-divided into smaller vineyard sub-regions that boast distinctive flavour traits. In very general terms Valle de Uco wines are often described as elegant, spicy, and floral, while Lujan de Cuyo wines are denser, and more mineral, with black fruit flavours.

…over the past 10 to 15 years, growers have been heading ever further up the Andes mountains in search of cooler temperatures,  fresher wines and the incredibly concentrated flavours that higher UV levels can bring.

This “modern Malbec”, in Cahors and Mendoza, is indeed more drinkable. Shedding some of its power and tannic thrust has resulted in lighter wines, without diminishing their ageing ability. A vertical of Château de Haute-Serre back to 1983 was indeed proof of both the evolution in style, and the ability of the more finely structured, pure fruited wines of the 2000s to age with grace.

Some Modern Malbec favourites from the two tastings included:

A blend of mainly Malbec, with Bonarda, and a splash of Petit Verdot sourced from several sites in Mendoza, notably the Valle de Uco. This is a really fresh, lively red with enticing floral aromas, underscored by hints of iron, and fresh red and black berry fruit. The palate is fleshy and round, with herbal, minty notes lifting the tangy black fruit and dark chocolate flavours nicely. Great value for the price.

Intense aromas of macerated dark fruits mingle with cedar and tobacco notes on the nose of this intriguing Malbec, Cabernet Franc blend. The palate is weighty, with a combination of brisk acidity and firm structure that ably counterbalance the concentrated core of rich, dark fruit. Polished tannins frame the finish. Needs a couple of hours decanting, or some additional cellaring to open further.

Discreet nose that reveals pretty blue fruit, graphite, and herbal notes with aeration. Really crisp and juicy on the palate, with loads of tart red and dark fruit, a firm, full-bodied structure, and fine grained tannins. Spicy French oak notes are well integrated on the finish.

Tupungato is the northernmost sub-region of the Valle de Uco. It is famed for the rich, concentrated expression of its wine. This lovely Malbec is no exception. It boasts a freshness and purity of flavour beautifully balanced by a dense, concentrated core. Red and black fruit mingle with violet, dark chocolate and tar notes on the nose and palate. Loads of finesse & lovely length.

Where to buy: Sadly not available here in Quebec! Look out for it on your travels.

The freshness of fruit impresses on this almost 20-year old Cahors. Notes of ripe blueberry and black cherry lift the tertiary earthy, potpourri aromas nicely. Quite elegant and understated on the palate, with mellow tannins, and delicate fruit and graphite flavours. Ever so slightly drying on the finish. Drink now.

Slightly muted on the nose, with notes of kirsch, black plum, earth, cedar and spice developing over time. Bold and dense on the palate, with a powerful core of dark fruit and spice, giving way to big, velvetty tannins and a long, lifted finish. Needs 2 – 3 years in cellar to integrate further and reveal the full extent of its undeniable elegance.

Where to buy: Enquire with agent: Philippe Dandurand