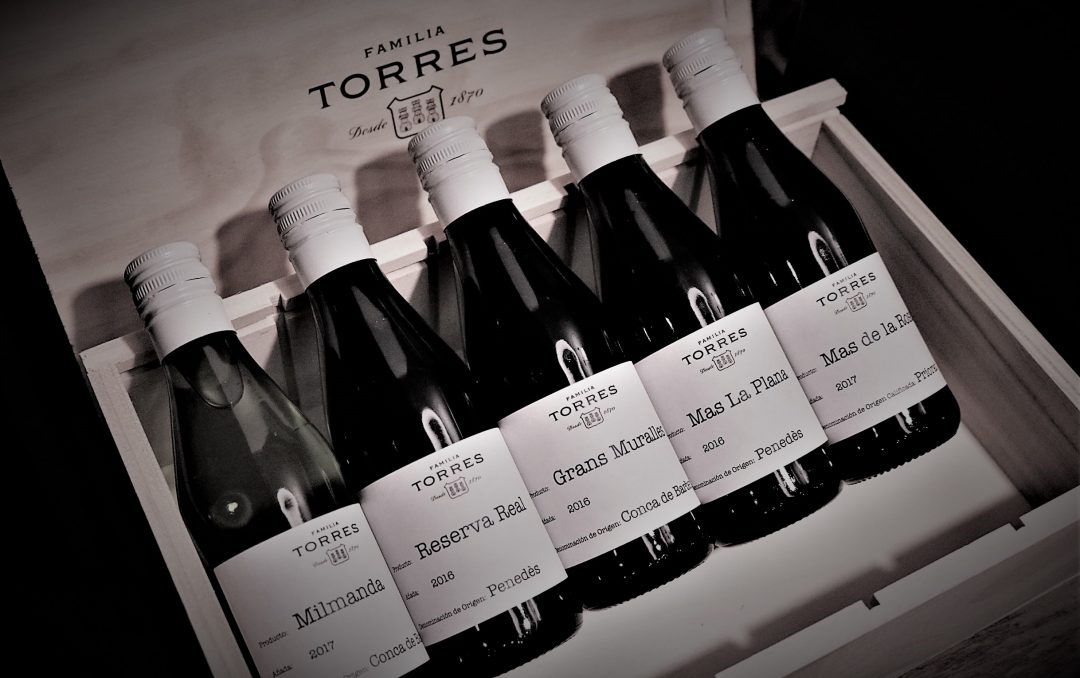 The Familia Torres Antologia wines are a collection of the Spanish powerhouse winery’s top five bottlings. According to Torres, this range represents the family’s most prized terroirs – they hold cherished historical significance, with a combination of old vines, mesoclimate, soil composition, and topography that set them apart.

In the 150 years since Jaime and Miguel Torres established Torres y Compañia in Penedès, the winery has seen five generations successively take up the reins. And with each changing of the guard came new innovations. Miguel Torres Carbó was the first in the region to bottle wine. Miguel A. Torres is largely credited for modernizing Spanish winemaking practices and bringing international varieties like Cabernet Sauvignon to Catalonia.

The current generation has been instrumental in reviving ancient grape varieties in Penedès and neighbouring regions. Ancestral Spanish cultivars like Moneu, Querol, and Garró had all but disappeared post Phylloxera. Miguel and Mireia Torres Maczassek are slowly replanting these forgotten grapes to preserve their region’s viticultural heritage.

Spurred on by Miguel A. Torres’ passion and dynamism, the family is also leading the way globally in terms of winery sustainability. In 2019, the Familia Torres co-founded International Wineries for Climate Action to “galvanize the global wine community towards creating climate change mitigation strategies and decarbonizing the industry”.  From 2008 to 2019, the company reduced their carbon dioxide (CO2) emissions per bottle by 30%, and target a 55% reduction by 2030.

In celebration of their 150th anniversary, a series of Torres Antologia tastings were organized. Participants received an elegant wood case of judiciously sized, 187-millilitre samples and an invitation to virtually taste through the range with chief winemaker, Josep Sabarich.

In discussions with wine professionals (and enthusiasts alike) I am regularly faced with a tiresome stereotype: that boutique-scale wineries necessarily produce more complex and interesting wines than their high-volume counterparts. They dismiss the idea that a winery can produce both commercial, mass-market brands and serious, single vineyard wines. Having worked for a producer who ably proved this possible, I am always keen to see what “terroir wines” look like from bigger bottlers.

The Torres Antologia tasting started with the only white wine in the line up, followed by a range of four reds:

Milmanda is a white wine made exclusively from Chardonnay. It is sourced from a Torres’ vineyard planted in the early 1980s in the Conca de Barberà DO. This inland growing region is located in south central Catalonia between two rivers, the Riu Sec and El Francoli. The soils are a red, silty clay formed by alluvial deposits. In a region where summer rainfall is scarce, the high water holding capacity of these clay-rich soils is crucial. The vines are forced to dig down deep for sustenance, resulting in low yields of concentrated fruit.

The 2017 vintage was particularly dry, with 40% less rainfall than an average growing season. It was also a warm year, though cooler conditions prior to harvest allowed for good acid retention. The Milmanda parcel is hand harvested. Fermentation is started in tank at cool, 16°c to preserve freshness. At the mid-way mark, the wines are transferred to barrels to allow for harmonious oak integration. Malolactic fermentation is blocked half way in further efforts to retain vibrancy. The wine is then aged on its fine lees in 50% new French oak for four to six months before racking to stainless steel tanks for a further 10 to 14 months with regular bâtonnage throughout.

Torres “Milmanda” Conca de Barberà DO 2017 has attractive aromas of lemon, yellow pear, acacia, and beeswax on the nose. The palate is fresh, broad, and subtly creamy, with moderately concentrated notes of juicy yellow fruit, grilled notes and hints of crème caramel. Round and faintly warming on the finish –  89pts. LW. Where to Buy: Inquire with Canadian agent Vins Dandurand for Torres Antologia wines (Winesearcher average price for Milmanda 2017: $68.00 CAD).

This iconic Torres cuvée hails from 60-year-old organically farmed Cabernet Sauvignon vineyards in the Turons de Vilafranca subzone of Penedès. This vineyard is on the site of the Torres winery. The vines are planted on a slope ranging in altitude from 180 to 240 metres above sea level.  The soils are very deep, diverse in nature, and of alluvial origin. They are moderately coarse, with layers of gravel, sand, silt, and clay; giving them good water holding potential. Huge efforts have been made in recent years to protect and improve biodiversity in the vineyard. The creation of wildlife corridors, planting of cover crops, installation of insectariums, use of integrated pest management techniques, and move to electric tractors are just some of the main initiatives in place.  Vineyard planting on this site began at the beginning of the 1960s, with many original vines still in existence.

Mas La Plana is fermented in a combination of vessels. Sabarich prefers large wooden vats for vineyard areas with warmer soils. These sites yield smaller grapes, with greater concentration and firmer tannic structure. He uses stainless steel for the cooler areas where grapes are larger and more acidic. Gentle punch downs helps with extraction, as does an extended maceration of up to two weeks. Ageing occurs in 85% new French oak in 300 to 500 litre casks.

This blend of 75% Cabernet Sauvignon, 13% Cabernet Franc, and 12% Merlot comes from the four-hectare vineyard, Les Arnes, in the Costers de l’Anoia subzone of Penedès. This area is due north of Mas La Plana. The site’s rocky Silurian slate soils are dark in colour, absorbing heat throughout the day and aiding with ripening. They are mineral-rich and free draining, yet quite shallow as hard rock blocks the vine from deeper rooting.

Grapes for Reserva Real are hand harvested. The three varieties are vinified separately, with a similarly long maceration and gentle extraction as Mas La Plana. However, instead of ageing in larger foudres (casks), Reserva Real is aged in new 225 litre French barrels for 18 months.

The Gran Muralles is a Mediterranean blend of mainly Garnacha and Cariñena, with small additions of Monastrell and native varieties Querol and Garró. Sabarich feels that “Garnacha brings the soul, while Cariñena provides the backbone of Gran Muralles”. He likes Monastrell for its bright fruit. Querol and Garró are among the grape varieties that the Familia Torres is endeavouring to bring back from near extinction in Catalonia. According to Sabarich, they add a hint of rusticity which furthers the aromatic complexity of the blend. The six-hectare vineyard site for Gran Muralles neighbours Milmanda, in the Conca de Barberà DO. This hilly plot features deep rocky, slate and granite-based soils with sandy areas.

The 2016 growing season was markedly different in Conca de Barberà as compared to Penedès. The weather was distinctly cool and rainy, producing a fresh and fruity style of wine. Much like Reserva Real, the Gran Muralles varieties are vinified separately, and then aged in new French oak barrels for 18 months before bottling.

Tucked away in a secluded valley of the Priorat near Poboleda, this small 1.86-hectare plot of 80-year old Garnacha and Cariñena was first vinified by the Familia Torres in 2016. The vineyard is perched on a sharply angled slope of nearly 30% grade. All vineyard work is done by hand, or by horse, due to the steepness of the hillside and the bush vine plantings. The parcel faces northeast and is shaded from midday onwards. This, coupled with the moderately high, 420 metre altitude create a cooling effect that preserves freshness in the wines. The soils are a pure, disintegrated slate called llicorella. They are shallow, nutrient-poor soils that encourage the vines to root deeply.

The 2017 growing season in Priorat was very hot and dry in the spring through to mid-summer, with marginally cooler conditions at harvest. Small berries produced dense, richly coloured wines. After an eight to nine day cold soak, fermentation takes place at cooler, 24°c temperatures “to avoid creating a massive wine, and losing the soul of the grapes”, explained Sabarich. The blend is then aged for 16-months in new French oak barrels.

*** What do VW, PW and LW mean?  Click on my wine scoring system to find out.