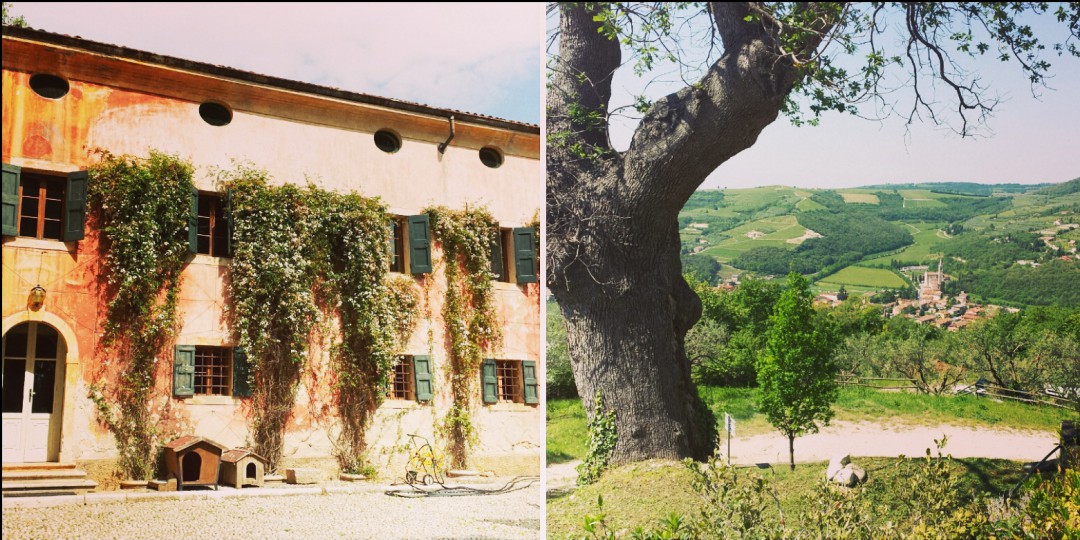 Valpolicella…land of wine, charm and tradition. So proclaims the Consorzio Tutela Vini Valpolicella, responsable for the marketing and promotion of the region. And they are not wrong. Those three descriptors aptly sum up what awaits you when you arrive in this sunny paradise. Lush green hillsides and plains covered in vines, cherry and olive trees, farmers out tending to their crops and ancient stone villages boasting delicious trattorias.

The vineyards of Valpolicella lie in the province of Verona in Northeastern Italy. There are three distinct areas. Firstly, the “Classico” region, the historic heart of the appellation which consists of three major valleys (Fumane, Marano and Negrar). This area is slightly higher in altitude than the outlying DOC area and benefits from optimal ripening conditions. “Classico” on a label of Valpolicella is generally a good indication of quality, although increasingly producers from the outlying areas further to the east (Valpantena and the generic Valpolicella DOC area) are now producing excellent wines.

Valpolicella is red wine country. All of the wines are blended from the same set of indigenous grapes featuring the prerequisite Corvina, Corvinone and Rondinella. Corvina is the major grape. It gives structure, body, bright acidity and attractive cherry and herbal notes to the wines. Its thick skin is a vital quality for the appassimento process (more on this later). Corvinone was originally thought to be a clone of Corvina, but has been proven to be a separate variety. The bunches are looser, with bigger grapes. It gives heady, perfumed wines, redolent with cherry and floral notes. Molinara is the minor player, accounting for 5 – 30% of blends. It is also a fairly aromatic grape, with the necessary thick skins. Small amounts of lesser known varieties like Molinara and Oseleta are sometimes thrown in for seasoning. Each producer will determine their own blend (within the DOC regulations), depending on what grows best in their vineyard, and what style they are looking to craft.

There are two key elements that make the wines of Valpolicella so enticing. Firstly, there is incredible value for money on offer here. While Tuscany and Piedmont enjoy greater international renown, the producers of Valpolicella have quietly but surely ramped up quality, while keeping the prices nice! Secondly, the region boasts unique winemaking methods resulting in a range of wine styles from light and fruity to rich and full-bodied.

As with so many classic, Old World wine regions, the wine classifications are best understood by picturing a multi-tiered pyramid. At the bottom of the pyramid, you have basic Valpolicella DOC. This is your every day, barbeque wine. It is lively, with tart cherry fruit flavours, medium body and smooth tannins. Served slightly chilled, it is dangerously drinkable. The next step up the pyramid brings us to Valpolicella Superiore DOC. These “superior” wines are aged a minimum of one year in oak or other wood vessels, and have a minimum alcohol content of 12%. They retain the bright, fruit driven character of the basic level, but with a little more depth and persistence. Ripasso della Valpolicella DOC offers even greater concentration and complexity. The vinification technique for Ripasso is unique. Dry base wines are made in the same manner as basic Valpolicella. Several months later, the base wine is transferred into a tank containing the leftover pommace of grape skins from the vinification of another wine, the Amarone. These skins are still rich in sugars and yeasts, provoking a second fermentation for the Valpolicella. The wine is “repassed” (hence the name Ripasso). This process adds glycerol (leading to a rounder mouthfeel), gives richer flavours and higher alcohol levels.

At the top of the pyramid, we have the two DOCG wines: Amarone della Valpolicella and Recioto della Valpolicella. This is where the “appassimento” process comes into play. Appassimento is the act of drying grapes for an extended period so that 40% or more of the water evaporates, resulting in shrivelled berries rich in flavour and sugar. The Amarone destined grapes are dried for 90 to 120 days on average, in large drying lofts designed to permit good air circulation. The bunches are carefully inspected throughout the process to ensure they remain in good condition, free of moulds that would taint the flavour. The raisined bunches are then carefully transferred to tanks or large wooden vats for fermentation, followed by long aging (2 years for Amarone, 4 years for Amarone Riserva) in large, generally neutral wood casks. The wine is opulent, bold, rich, full bodied, highly alcoholic, generally over 15% and often up to 17%. These are reds to cellar for 7 – 12 years and serve with savoury, hearty fare. Recioto winemaking begins in the same way, but the drying period is longer (120 to 150 days on average), and instead of then fermenting the wines dry, the process is halted mid-way to give a rich, concentrated, cherry and dried fruit scented, sweet wine (often up to 150g/L of residual sugar).

Recioto is the oldest wine style of the area with a history dating back to the ancient Greeks and Romans. The “Retico” was the wine of choice for the emperor Augustus, and the pride of all growers. It was in crafting this fine nectar that the Amarone style was (accidently) born. Amarone derives from the Italian word for bitter, and was the adjective used when the Recioto was occasionally left too long during fermentation with all of the sugar transformed to alcohol. The dry, alcoholic wine was considered overly bitter and generally thrown away. Not until the 1050s did opinions change and the Amarone style become appreciated in its own right.

Valpolicella is a storied region, with a long history of crafting unique, captivating wines. From light and fruity to heady and rich, there is a wine for every palate. Try this local recipe with a glass of Ripasso or Amarone and you will be packing your bags for Verona!