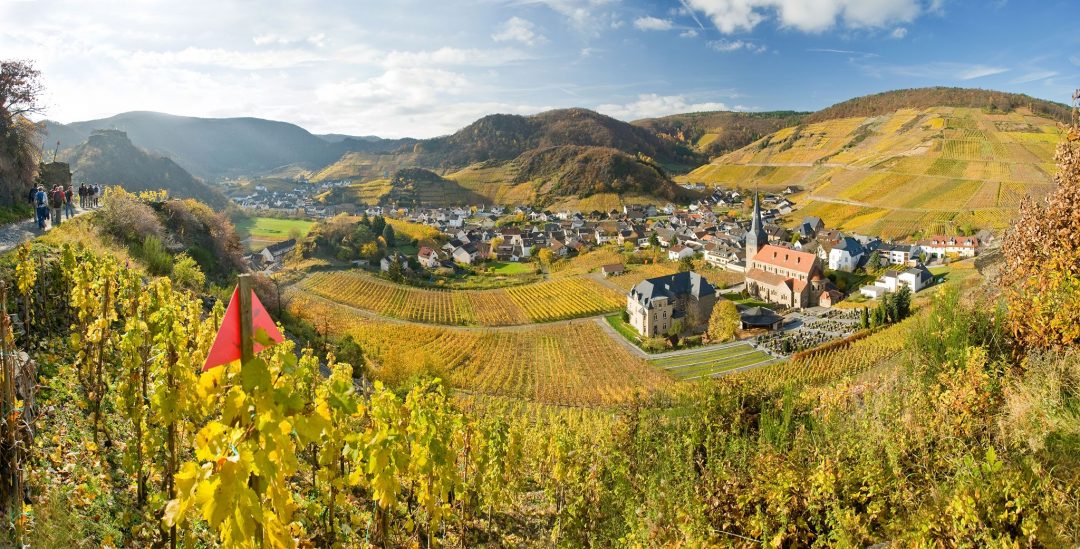 Germany is the third largest producer of Pinot Noir world-wide. This fact surprises many wine lovers, more familiar with its racy, aromatic white wines. Pinot Noir, referred to as Spätburgunder in Germany, was brought to the region from Burgundy in the 4th century. Despite this long history, international acclaim for German Pinot Noir is a recent phenomenon.

Why was this Recognition so Long in Coming?

Until the late 1980s, less than 5000 hectares of Spätburgunder was planted in Germany and domestic demand was high. What little volume left the country was resoundingly panned by international critics.

This negative quality perception arose for a variety of reasons. The most obvious of which was Germany’s cool climate, where the late ripening Pinot Noir often struggled to achieve balanced sugar and phenolic maturity.

The largest producers of German Pinot Noir in the 1970s and 1980s were the regional cooperatives. These wineries prioritized quantity over quality, using techniques like thermovinification to produce easy drinking, commercial wine styles that were often slightly sweet.

According to research carried out at Berlin’s Humboldt University, over the past 40 years Germany has experienced an average increase in air temperature of 1.4°C. These warmer conditions facilitate Pinot Noir ripening.

That being said, the real upswing in German Pinot Noir quality is generally attributed to a small band of determined, quality-minded producers. Winemakers like Baden’s Bernhard Huber, the Knipser brothers from the Pfalz, and Rudolf Fürst of Franken, began traveling to Burgundy and implementing techniques learned there.

This quality revolution started attracting global attention in the late 1990s. By 2010, Spätburgunder acreage had doubled. Producers were harvesting earlier and focusing more on freshness and aromatic purity, rather than body and alcohol. The use of new oak also declined significantly during this period. Mainly seasoned French oak barriques became more common place, as did a return to large, traditional German fuders.

What is the Status of Spätburgunder Today?

The quality of German Pinot Noir is a source of unabashed national pride. Wines of Germany writes: “the Spätburgunder is to red wine what the Riesling is to white wine: the cream of the crop.”

There are now 11,800 hectares of Pinot Noir vines planted in Germany, making up 11% of the country’s total wine grape plantings. The first German Pinot Noir revolutionaries have been joined (or replaced) by a second generation. These newcomers have access to far superior red winemaking educational resources in Germany, and many have also completed harvests abroad.

Critics praise the vibrant acidity, aromatic purity, balance, and sense of terroir imparted by top German Pinot Noirs. However, both producers and international observers are quick to point out that there is no one catchall German style when it comes to Spätburgunder.

Significant variation in soil type, climate conditions, orientation, and so forth from one region to another, and across vineyard sites results in wide stylistic diversity. The use of German vs. French clones also has a major impact on wine style. German Pinot Noir clones are said to give more intense red fruit flavours and herbal undertones, whereas the Dijon clones often impart darker fruit notes and a deeper, more savoury nuance.

Where is Spätburgunder Grown in Germany?

Most Spätburgunder is planted in Germany’s southernmost vineyards of Baden and Württemberg. The Baden region alone has more Pinot Noir planted than New Zealand or Australia. The sub-region of Breisgau is particularly prized for its cool mesoclimate and limestone soils, yielding pure, elegant wines.

Despite its northerly location, the Ahr is also a key production region for German Pinot Noir with 65% of its vineyard area dedicated to the grape. This sheltered valley with its heat absorbing slate and graywacke soils, produces distinctive cassis-scented, smoky, flinty Pinot with lively acidity, and silky tannins.

Ripe, full-bodied Spätburgunder is produced in the Pfalz, ranging from fruit-forward and rounded to firmer, and more tannic, depending on the site. Small volumes of top-quality Pinot Noir is also produced in the Rheingau and the Mosel Valley.

*** This German Pinot Noir article was written for SOMM360  Want to learn more about wine & spirits? Check out their excellent learning platform for articles, audio capsules, and loads of fun quizzes to test your knowledge. ***