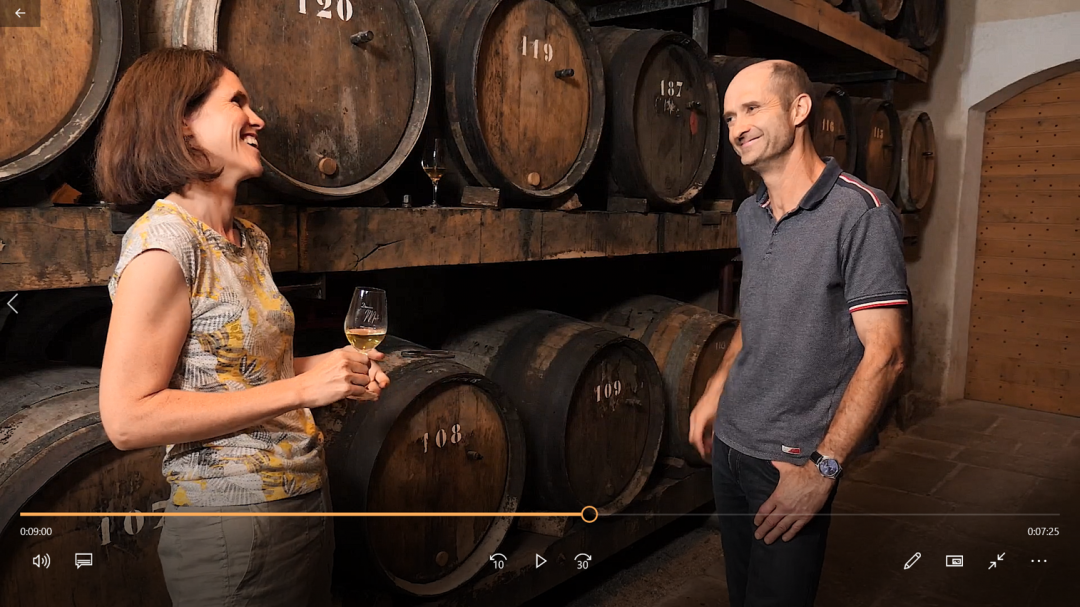 The Jura is fascinating wine country. Despite its small size, this historic French vineyard is beloved by sommeliers the world over. Curious to learn more, I set out to make a Jura wine film; journeying to the region with a rockstar camera crew to discover the Jura’s distinctive grapes, wine styles, terroirs, and more.

Join me as I dig in the vineyard soils with Stéphane Tissot, learn the secrets of Vin Jaune winemaking with Domaine Macle, and taste some Crémant du Jura bubblies with Domaine Baud. Tour the market of Arbois with me, alongside Meilleur Ouvrier de France, sommelier Philippe Troussard to find out what foods pair best with Jura wines.

To read up on the Jura, its famous Savagnin, Poulsard, Trousseau, and more. Read my article here. Otherwise, hope you enjoy the video. If you do, please feel free to give me a like, share, or comment!

FLOR POWER: The Effects of Biological Ageing in Wine

Flor is the Spanish or Portuguese word for flower. In wine terms, flor refers to a layer or film of yeast that forms on the surface of wines after alcoholic fermentation, under certain winemaking conditions.

When these yeast cells coalesce to form a continuous layer on the top of the wine, they create a protective barrier that inhibits oxygen exposure. This phenomenon is referred to as biological ageing.

Fino style Sherries are famous for their maturation under flor. Vin Jaune from the Jura region in France is another well-known example of wine aged sous voile (a French term which means, under a veil) – although here, the yeast layer is often thinner and not totally hermetic.

How does Flor form?

The yeast responsible for alcoholic fermentation in wine, mainly strains of the species Saccharomyces cerevisiae, generally die off once all fermentable sugars have been consumed. However, some strains can spontaneously transition to an oxidative mode, metabolizing glycerol, alcohol, and volatile acids in wine. These yeast cells float on the surface of the wine and develop a waxy coating. As they multiply, the cells spread out across the surface, forming a continuous layer.

For this to happen, certain conditions must be met:

Each vessel will have a different composition of flor yeast strains. When sampled individually, these barrels have quite distinctive aroma and flavour profiles, each bringing complexity to the final blend.

What does the Biological Ageing Process Bring to Wine?

Biological ageing protects wine from oxidation. Wines aged under an unbroken layer of flor will be very pale in colour with fresh acidity and youthful vibrancy. Where the flor layer is not continuous, as is often the case with the voile in Vin Jaune, this effect is negated.

As it consumes the alcohol in wine, the flor yeast produces acetaldehyde. This compound gives off distinctive bruised apple and nutty aromas.

The flor yeasts also feed off the wine’s glycerol. As glycerol diminishes, the round, smooth mouthfeel of a wine diminishes making it far lighter and somewhat sharper on the palate.

Flor yeast activity also leads to the increase of an aromatic compound called sotolon. At low levels, sotolon gives notes of maple syrup or caramel. At high concentrations, it gives off exotic spice aromas like curry or fenugreek.

Winemaking experiments with flor are happening all over the world now. From California, to Australia, to Argentina wines labeled sous voile are cropping up – using a range of techniques from strict, reductive biological ageing to a more oxidative approach.

*** This Biological Ageing in Wine article was written for SOMM360  Want to learn more about wine & spirits? Check out their excellent learning platform for articles, audio capsules, and loads of fun quizzes to test your knowledge. ***